Consider an example where the Power BI report is using Azure Analysis Services (AAS) cube in the back end. When a high number of user connections are created using VSTS load testing, it is a good practice to analyze what is happening to the system in the background. Monitoring the logs can help us analyze system usage and help make informed decisions about scaling up or down. This can be achieved by monitoring each of your system logs.

Analysis Services provides metrics in Azure Metrics Explorer such as to monitor memory and CPU usage, number of client connections, and query resource consumption which helps to monitor and investigate the performance whether the production server can work good with high no. of user connections in real-time. Further, the metric – query pool job queue length, increases when the number of queries in the query thread pool queue exceeds available QPU and this would eventually impact the performance of the server. If the QPU is getting maxed out during load testing, it means that the number of queries against your model is exceeding the QPU limit for your plan.

For example, in image 1, QPU usage is 100. The given AAS instance is having S1 pricing tier and it comes with 100 QPU and 25GB of memory capacity. With the given number of user connections, QPU is getting maxed out. It means that there is a CPU bottleneck and it is very likely that queries are queuing up waiting for available resources to execute.

This determines whether scaling out for the server is necessary or not. If QPU usage is getting maxed out, then scaling up for the server is advisable. Scale-up decisions can be taken when your model is redesigned in an optimal way. Redesigning the model would save resources and make it unnecessary to scale up.

It gives many insights on capacity performance. There are six different pages going from a global overview on ‘Resource consumption’ to more specific details in ‘Datasets’. Let’s take a quick look:

To monitor any noticeable drop in the performance during load testing, the ‘Resource consumption’ section will help to investigate whether the issue is memory related or CPU related and which of the Power BI components is causing it.  The tab is split into two visuals – CPU usage and other memory consumption. It can give a fair indication if the workload limit is constrained. 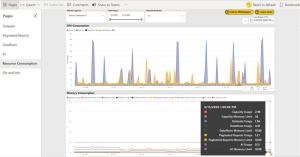 With these metrics, you can make more informed decisions and truly manage/upgrade your premium capacities, workspaces, datasets, and workloads.

You can also leverage the SQL profiler tool to trace activities and operations executed on an analysis service or any database engine to be analyzed later. SQL Profiler tracks engine process events such as the start of a batch or a transaction. It captures data about those events, enabling you to monitor server and database activity like user queries or login activity. SQL Server Profiler is responsible for two main operations:

Login to the Azure Analysis Service Database and select SQL Server Profiler. Create a ‘Trace’ by providing Trace Name. You can also provide the time frame for traces to keep running during load testing. Click on ‘Events Selection’ tab and select the events which are useful for debugging and analysis purpose. In image 5, the selected events are related to dead-locks and resource group governance to identify if CPU usage or memory utilization is exceeding. 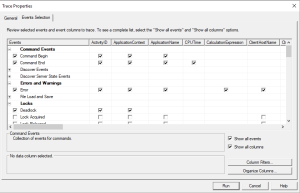 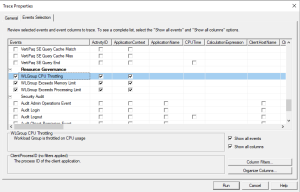 The image shown below explains the DAX query plan execution and the time taken to generate data. We can analyze those queries which are taking more time and plan to optimize them. Further, we can identify the queries and the time at which CPU utilization is getting throttled. If the CPU/memory utilization is throttling at an observed point of time, then it is advisable to check how many users are loaded in VSTS load testing at that time. In such a scenario, we can revisit the capacity or optimize DAX in order to improve performance. 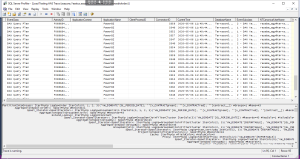 Http 403 Error: Forbidden.  AUTH token has expired and you need to replace it per request

Https 405 Error: Method not allowed. This error occurs when a wrong method is added in the request. To solve this, you need to check and use the proper method in the request

Https 429 Error: Too many requests.  Add ‘Think time’ for resolving this error

Last but not the least, let’s take a quick look at the pricing:

Some of the advantages of using this method are:

Some of the challenges associated with the use of VSTS are:

Ready to get started?